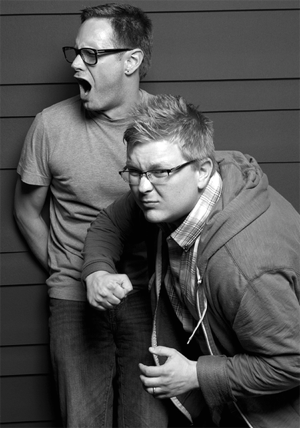 Tell us about your respective professional backgrounds. How did you come to form your creative partnership?

Our love affair began at Pyper Paul + Kenney, a small boutique shop in Tampa, FL. But it wasn’t all roses and peaches when we first met; in fact we both thought the other was a dick. It wasn’t until I needed a guitarist for an indie rock band I was forming that Dustin and myself really started working together. But Dustin (Art Director) hailing from the mistake by the lake Cleveland, Ohio and myself (Copywriter) having grown up in the trailer park communities of Clearwater, FL, quickly realized we had a lot in common. It worked out pretty well, because the first thing we ever worked on landed us in Cannes. We entered the Young Lions Competition in the states and ended up representing the country in the film category. It changed our lives and livers forever.

When we got back from Cannes we had a whole new perspective on what it was we wanted to do in this crazy business. So we jumped ship to 22squared to work on larger brands who wanted big digital and social ideas in addition to the usual TV and print mumbo jumbo. There, we touched just about everything we could and did some really fun work for Baskin-Robbins, Dunkin’ Donuts and Buffalo Wild Wings.

After a few years at 22squared we had the opportunity to help reinvent the JWT Atlanta office with Perry Fair, and we jumped right in, especially since we hadn’t experienced life inside a big network shop yet. So far we’ve had a blast. We’ve been in Atlanta and at JWT now for about two years as joint CDs overseeing an amazing team of 12 creatives. We’re excited about the work we’ve done so far in such a short period of time and are even more excited for all of the work that’s in the hopper.

Your client list at JWT includes Jiffy Lube, Pennzoil, Quaker State, Scana Energy and Shell V-Power. Talk us through the creative process behind a recent campaign you masterminded for one of these clients.

We were invited to London to take part in a global creative brief for Shell V-Power, a high performance gasoline. It was a week’s worth of relentless concepting, presentations and tea breaks, working with folks from all over the world. Ultimately, our English chaps and the client were most impressed with our ideas and we ended up seeing the whole thing through. The campaign in our minds was to try and convey all of Shell V-Power’s complicated scientific benefits and simplify as much as possible in language the world could understand. And that’s how we landed on the whole transform your drive with Shell V-Power concepts. It was one of the raddest productions we’ve ever been on. We pretty much got to take a Ferrari and Drive it in places where it didn’t belong. Up 30 ft ramps in downtown LA, through the LA River like they did in the Terminator movie, it was crazy. Plus now we get to watch our spot in like 30 different languages. The German version is our favorite so far.

What is the culture like at JWT and how is the creative department in Atlanta structured?

We’re a motley crew of diverse individuals. Especially within our group. We also tend to operate more like a boutique shop which we love because it allows for us to work closely together to build chemistry and an amazing level of trust. We constantly push each other and are super supportive. It’s a great environment, especially if you like to make fun of people and pull pranks. I feel like we’re constantly doing that with each other.

Do you ever encounter creative differences?

It’s a checks and balances process but we’re usually on the same page, and when differences arise we just resolve them with a good arm wrestling match. But after 6 years together you tend to learn what the other is thinking. We joke all of the time cause still to this date I’m Dustin’s longest committed relationship.

Who has inspired you the most in your careers so far?

Dustin: Early in my career I thought was going to be designing awesome rock show posters my entire life like my idol, Art Chantry. I hold him personally responsible for the reinvigoration of the concert poster during the 1990’s as he designed and screen printed show posters for all my favorite rock artists. From Nirvana and The Melvins to Mudhoney and The Breeders, he’s created some of the most iconic rock art ever – without a computer. Chantry advocates a low-tech approach, creating a style that some people have spent a majority of their careers trying to replicate. His technique, aesthetic and body of work awed me and I soon started applying his principles to the ads I was creating at work. Don’t get me wrong, I can rock the hell out of some computer graphics, but Chantry taught me that creativity comes out of your brain, not the computer. The computer is only a tool.

Jeremy: Currently it’s my son. His imagination is unbelievable. He’s like the brainiac kid from Jerry McGuire. He kind of looks like him too only he’s 3 and a half. I draw a lot of inspiration from him. He’s also my biggest fan and no matter what I do he sees the good in it. And after working in this industry, it’s nice when someone like that is around all the time.

Which campaign have you had the most fun working on together?

We have fun on every campaign we produce, but our favorite so far has probably been the Jiffy Lube “Highly Trained” campaign. We got to work alongside the Perlorian Brothers, and cut everything with the extremely talented Carlos Arias at Rock Paper Scissors. Plus Marcus Wood and the VFX crew over at MPC New York were super cool and dropped a lot of knowledge on us. We also casted pro skateboarder and Jack Ass crew member Preston “Long Arms”. It was just a moths worth of nonsense that involved crazy wirework, lighting things on fire, an ostrich and even a professional balloon animal maker. The whole project from start to completion was a party and the client’s partying too because for the first time in 8 years Jiffy Lube’s car counts are up.

Very early in the morning or extremely late at night. That’s when we usually do our best work. Our process is a lot like our songwriting, we tend to take turns riffing back and forth. It’s like a jam session where we constantly build off of one another. There’s also this amazing little bar we like to work at called Victory Sandwich Shop. A lot of ideas have been created inside that place. And if we’re ever in a pinch, one or two of their Jack and Coke slushies usually does the trick.

What has been your most groundbreaking advertising idea?

The one we’re working on right now for Pennzoil. It’s one of those once in a life time opportunities. It’s kind of top secret so we can’t really say much. But it should be awesome. It could disrupt the entire category of motor oil.

Which brand would be your ultimate client?

One that’s open to business changing ideas in addition to creative ones. We like to immerse ourselves in the client’s business as much as possible and help them accomplish or solve things in a manner that might not be an ad. We also tend to find that the more open the client is the better the work.

Which ad could you watch again and again?

Right now we’d have to say the Southern Comfort work coming out of the W+K NY office. It’s so simple and the casting is spot on. We’re huge fans of simplicity and this entire campaign is spot on. It never gets old. The other that comes to mind is The Crossfire board game spot from the 1980’s. We reference it all the time and it’s a great example why infectious jingles need to make a bigger comeback in the present day. DON’T GET CAUGHT UP IN THE CROSSFIRE!