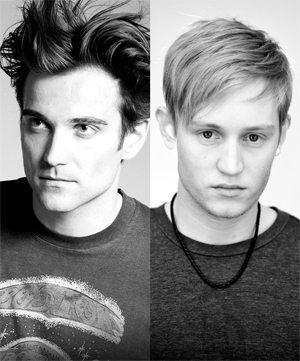 Did you follow a traditional path to enter the advertising world? Tell us about some of the highlights so far…

Aside from studying architecture (Alexander) and working as a windsurf instructor (Feliks),it’s been pretty traditional. We both went to Miami Ad School Europe in Hamburg. We were in the same quarter and started working together as interns at Y&R New York. We had a good two years there working with Menno Kluin as well as Scott Vitrone and Ian Reichenthal before we came to Droga5 in 2011.

We’re both from smaller towns in Germany, so just the fact that we’re living and working in NYC is a highlight for us.

Working with directors like Bjoern Ruehmann (Furlined) and recently Martin De Thurah (Epoch Films) have been great experiences, too.

How does your creative duo work?

We’re lucky to be able to balance each other’s strengths and weaknesses. We concept and come up with ideas together. Alexander takes care of the art direction and Feliks does the writing. We learn from each other in both departments. When it comes to execution, we’re both very involved. We like the crafting part of the process, whether it’s storytelling, cinematography, typography or graphic design.

Describe the working culture and environment at Droga5. How is it different to other agencies?

There’s a lot of energy in a small amount of space because we’re growing so fast. There are a lot of young, smart, ambitious people in every department. It’s great because it never feels like there are just a few creatives struggling against a bigger system; instead, everyone involved is invested in the work being as creative and smart as possible.

How do you feel about having to compromise with a client on your original creative idea?

It’s never an easy thing, but compromise comes with the territory in advertising. Truly original ideas are naturally harder to sell in precisely because they are unfamiliar and don’t necessarily have a rational or concrete reference point to which to tie them. That’s when compromise comes into play and in our experience can sometimes harm the work.

How do you refresh your creativity?

Which photographer(s) / illustrator(s) work do you particularly admire?

Which award(s) are you most proud of?

The first One Show Student Gold was special because it was the first award we’ve won.The D&AD Yellow Pencil and Young Guns Of The Year award for the Airwalk Invisible Pop Up Store were great, too.

Select 3 recent campaigns from your portfolio to share with our audience.

The world’s first invisible sneaker store for the relaunch of the JIM.

What’s been your most stimulating creative brief to date?

The repositioning of Hennessy was an exciting challenge for us because the brand came to us when they were at an interesting crossroad:

In the 90s, Hennessy resonated as a status symbol with a multicultural target amid an era of bling and decadence. However, after the financial crisis, the image of success changed for this target. Outward displays of excess like flashy diamonds and throwing money around in clubs were no longer considered cool, and Hennessy wanted to shed the image that it was a brand associated with a passé era.

Instead of focusing on outward symbols of success, our strategy was to establish and focus on the target’s new definition of success: personal achievement. The “Never Stop. Never Settle.” ethos was born out of that insight, as was the concept of the Wild Rabbit as a metaphor for one’s inner drive to succeed.