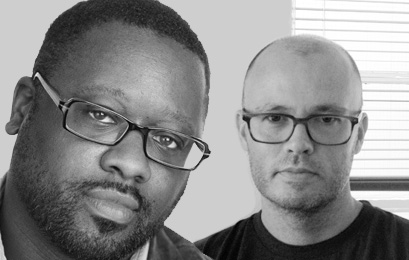 What kick-started your respective careers in advertising? Tell us about some of the most thrilling moments.

Chris:
My interest in advertising was sparked by Alan Holliday, the co-founder and creative partner at Hill Holliday. He was a professor at Boston University long before it was popular to go to a graduate advertising program. I took his class, Introduction to Advertising, and was immediately hooked. I loved his energy, smarts, and sense of humor – three traits I still love about advertising people today. After graduating I went to New York and got a job as an account coordinator at Y&R. At the same time I went to SVA at night and put a proper student book together. Much to Y&R’s credit they re-hired me as a junior copywriter. I ended up staying there six years in total. In terms of thrilling moments, getting that first job was certainly one of them. I literally remember sitting in briefings thinking to myself, “I can’t believe I get paid to do this.” But, I have to say, every time something gets produced that I’m proud of it’s a thrill. If you don’t get that feeling, get another career.

Kinney:
As a kid I loved taking mechanical things and electronics apart to see how they ticked. When my parents grew tired of finding their stuff in pieces all over the house, they pushed me to find a new creative outlet, painting. It didn’t take long before I was dead-set on being a painter. So, I enrolled in Tyler School of Art at Temple University where I thought my painting career would get the boost it needed to take off, becoming the next Jacob Lawrence or Aaron Douglas. Well it didn’t. A few weeks into my first semester I realized that painting was just one of the few mediums I had a passion for. As I explored sculpture and design, I really took to the graphic design program. It was challenging, everything was like a competition with myself. It was like the ultimate puzzle that never ended. Every project led to having to master a new skill or subject to understand. This constant stream of problems to dissect and solve hooked me.

How did your current collective creative leadership role at Tribal Worldwide come about?

Chris was at R/GA working on some really interesting brands – Nike, Google, Unilever – and I was at Tribal, having been here for a number of years and seen it through many changes. We began talking about what was possible, which is always a great place to start a creative partnership. We both saw enormous potential in Tribal. It’s a place that in its thirteen-year history has done incredible things but had gone quiet in recent years. For us, it represented the opportunity to do more than create great work for a brand. It represented the opportunity to rebuild an office, which is a challenge for us both but an incredibly exciting challenge that we agreed to take on.

Tell us about the dynamics of your working relationship.

Tribal Worldwide’s mission is all about ‘Bringing Humanity to the Digital Age’. Tell us about a recent campaign which brings this idea to life.

The best example of that is the Feedies app we recently launched for the Lunchbox Fund. The app uses the behavior of sharing food photos with friends via social media and converts it into actual donations for malnourished schoolchildren in South Africa. This is using digital in a very human way for two reasons; to capitalize on an existing behavior and to use technology to help kids in a very tangible way.

How important is fearlessness in the successful outcome of the creative process?

Chris:
I think fearlessness is overrated. Fear is a great motivator, especially for creatives. Fear of being judged by your peers. Fear of not being able to deliver. Fear of not having another idea. These work in favor of the creative product, motivating people to push harder, which I think is a good thing.

Kinney:
I agree with Chris, fear is one of the greatest motivators, but it has to be focused on a collective goal when working within a creative group. It shouldn’t be about “you” or “I” against the world. It has to be “we” can solve this, “we” can figure this out. We have to be fearless to be competitive in advertising. We have to go beyond what we know we’re capable of. That is the only way an agency can stay fresh and on top of its game.

What makes Tribal Worldwide’s creative output stand out from the rest?

There are certain agencies that are known for a specific thing, a specific deliverable. Tribal is unique in that it is always looking for new ideas, new ways of doing things. There’s scrappiness and a curiosity that helps us bring unexpected thinking to the table. We’re not always right but we are always interesting and we think that defines our work and our culture.

What qualities do you look for when seeking out fresh creative talent?

Everybody coming out of school these days has a decent book. What sets a person apart is a hunger to create. The simplest way of telling if someone has that hunger is if they’ve made anything without the assistance of an agency. Did they get some friends together on a weekend and shoot the spec spot? Or make the app that they are so proud of? People say, and we believe it’s true, if you want something you’ll find a way and if you don’t you’ll find an excuse.

We look for people that like solving problems and like jumping into the deep waters. When they speak about a creative challenge in school, an internship, etc., we listen to see if they talk about how they solved or got around it. We’re not interested in those who say, “There was nothing I could have done to make this better,” there is always room for something. When you work in advertising, you have to be ok with your work never being in a finished state, there is always room to make it better.

The greatest challenge for us is making sure we have the right creatives in the room at all times. We manage a department that’s always in flux. Making sure the right people are in the right place is a daily challenge because just when things seem aligned, things shift.

Tell us about the most exciting creative brief you have ever received.

Chris:
The most exciting brief is the one sitting on my desk right now. What makes it exciting is that it hasn’t been cracked yet and that’s the most fun thing in the world – getting started.

Kinney:
Yeah, for me it’s exactly that, “What’s next?”

Who have been some of the most influential figures in your creative careers?

Chris:
Two of the most influential people in my career have been Gerry Graf and Nick Law. I’ve had the privilege of working for both of them at different times. I can’t say I learned more from one than the other but the combined experience really reinforced that there isn’t one way of doing things. These guys have very different approaches but are both extremely successful, reminding me daily not to fall into a singular way of doing things, ever.

Kinney:
I have learned a lot from some of the greats in the industry, but the biggest influences on my career and work has always been those outside of the general advertising field. Technologists, industrial designers, fine artists and thinkers. The connective tissue for me are those who bring things into the world made for people to experience something familiar in an unfamiliar manner. Whether it’s a breakthrough in practical product design or simply a random artful act of humanity, I find it inspiring to see how others are making the world more interesting and better by trying something different and putting themselves out there.